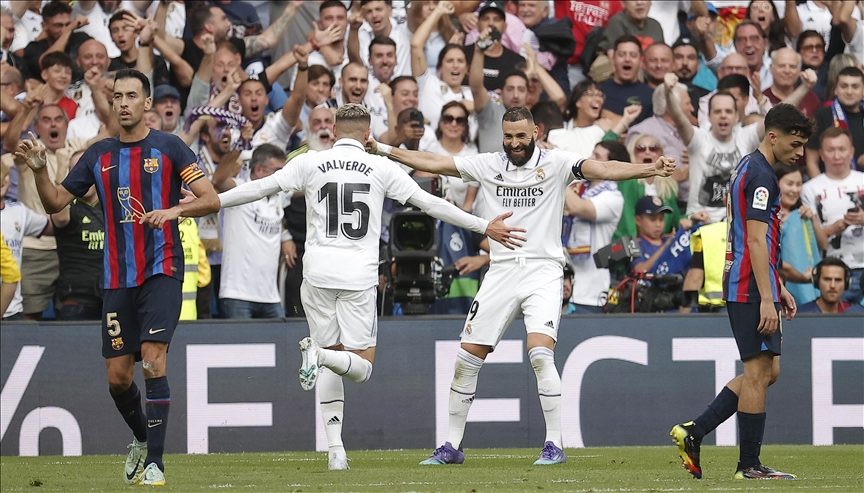 On Sunday, 16 October 2022 the 250th El Clasico got underway at the Santiago Bernabeu, home of the European Kings. The biggest match in world football ended on a very positive note for Real Madrid fans watching as they watched their team blew away Barcelona 3-1, leaving the Catalunya base sorrowed. That win now means Real Madrid go 3 points clear at the summit of the Spanish La Liga thanks to goals from Karim Benzema, Federico Valverde and Rodrygo Goes.

It didn’t take long for Real Madrid to open the scoring, and who better than the Balon d’Or favourite Karim Benzema to score the first goal of the 250th edition of the Clasico, doing so at just 11 minutes into the match. Kroos was able to release a through ball to continue a Madrid break as he was being pulled to the ground by Busquets, setting Vinicius Jr. well on his way only to have his dinked effort saved by Ter Stegen. However, as the ball crashed against the body of the German, the rebound could only fall for Benzema who made no mistake with the finish to make it 1-0 to Los Blancos.

Barcelona were then presented with a glorious chance to equalise in the 24th minute, Raphinha’s far-post aimed cross found a sliding Lewandowski but the La Liga top scorer was in disbelief when he sent the ball over the bar from point-blank range. Lewandowski and his teammates would come to rue their missed chances when Real Madrid were able to double their lead in the 35th minute through Valverde’s low placed shot into the bottom left corner to make it 2-0 Real. That shot came after a poor attempted interception from Garcia allowing Vinicius to carry the ball into the danger area before his teammates could put together a string of passes that opened up the space for the Uruguayan to take his shot. Valverde put up an impressive display that was able to get him the Man of the Match award.

The teams went into the break with Real leading the scores, and just after 6 minutes into the second half, Karim Benzema had once again put the ball into the net but it would be ruled out for him being in an offside position in the build-up to the finish. Should that goal have stood it would’ve certainly been a wrap for Barcelona’s hopes in the, fortunately for them it wasn’t a huge blow as they pulled one back through substitute Ferran Torres after some brilliant play from fellow substitute Ansu Fati down the left wing in the 83rd minute. The game was now alive with Barca hoping to get level and maintain top spot. Those hopes would be diminished in the 91st minute when Real Madrid substitute and wonderkid Rodrygo converted a penalty he had won after he was fouled in the box by Eric Garcia.

That win now meant Real Madrid are 3 points clear of Barcelona at the top and remain the only unbeaten side in La Liga in their continuing quest to retain their title, a statement victory for the hosts. Barcelona face Villareal in their next fixture (20 October) looking to bounce back, while Real Madrid will be going up against Elche (19 October).