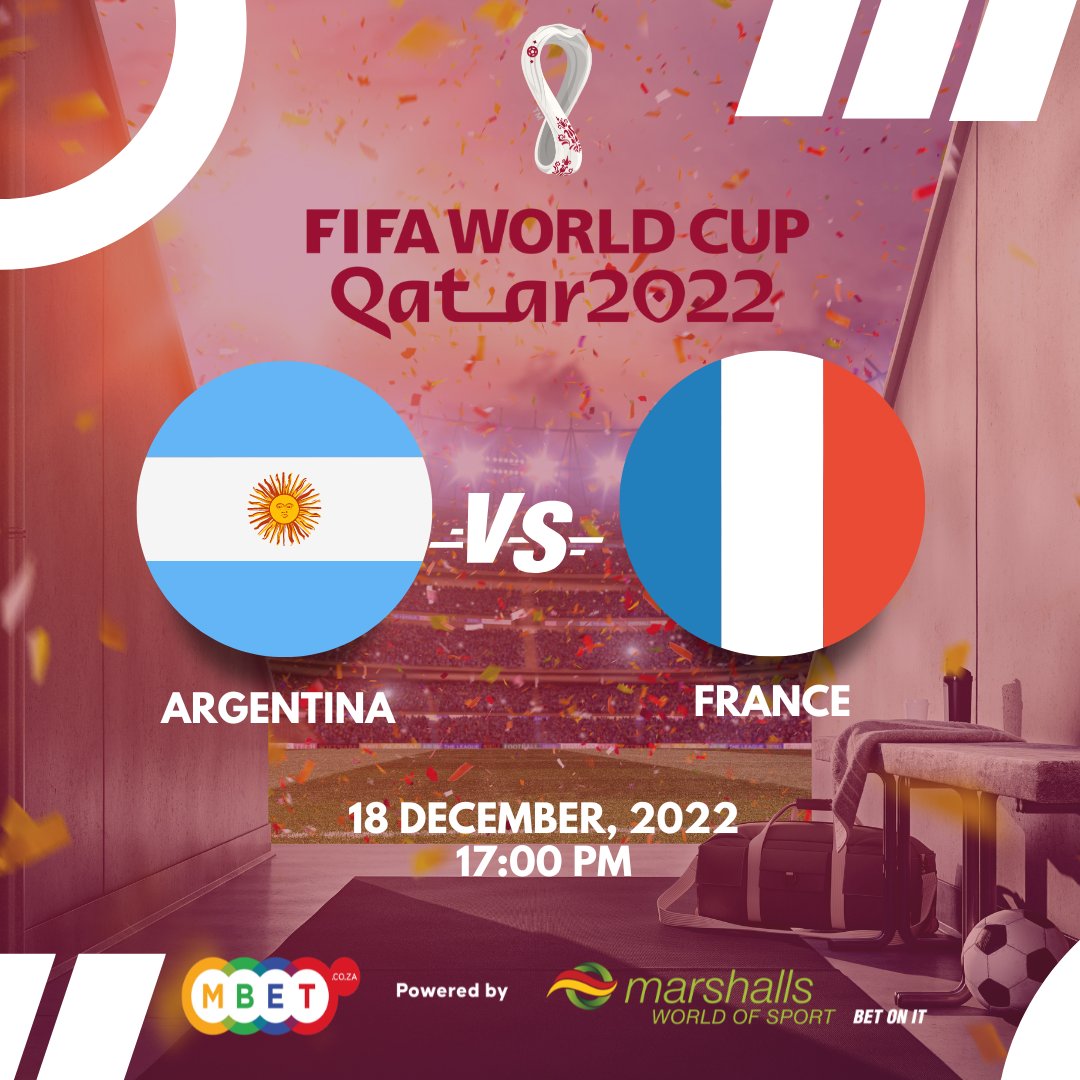 IT’S ARGENTINA VS FRANCE!! THE FINAL SHOWDOWN OF THE 2022 FIFA WORLD CUP!!

Argentina will battle it out with France at the Lusail Stadium on Sunday, 18 December for the chance of donning the title of ‘World Champions’ and returning home with the lucrative trophy being heroes of their nations. There is a lot at stake and lots of records to look out for as well when these two continental giants face off to close off the Qatar spectacle in fiery style.

Lionel Messi has one final chance to finally capture the biggest trophy in World football, a trophy that has eluded him his entire life. A final crack at the ultimate title, especially as he has announced officially that the final Argentina will be playing on Sunday will be his last World Cup and so is looking for a fairytale end with the Albiceleste. He’ll be ending his World Cup journey with the Argentina national team as the top scorer (11*) for them in the World as well as having made the most World Cup appearances in history. Messi has been the focal point in a majority of Argentina’s World Cup games, winning the Man of the Match award a whopping 4 times out of their 6 games, and winning his 10th overall in the World Cup against Croatia, setting a new record for most Man of the Match awards in World Cup history.

Kylian Mbappe will be looking to solidify his already great legacy at the tender age of 23, and prove once again as he has done time and time again that he is the present and the future of the sport that is loved by everyone. Mbappe played a vital role in putting Argentina to the sword in the Round of 16 back in 2018 en route to lifting the trophy, scoring 2 goals in their 4-3 win. He will be facing them once more and this time facing against Leo Messi as a fellow PSG teammate, who he’s currently level with on the top scorers list of this year’s World Cup (5 goals). At the 2022 World Cup campaign the 23 year old has been vital once again in his team’s excellent run to the final, being a constant threat to many teams’ defences, with the assistance of Antoine Griezmann.

*As it stands, figures relative to current matches played.

Argentina were marked as one of the favourites to win the entire competition by various football pundits and experts, and they’ve done very well to back up those claims by reaching the competition’s final. The South American champions stumbled in their first game causing many to doubt them in the process, but a quick and excellent recovery to win all their succeeding games and scoring 2 goals or more in every match. Argentina’s last success in the World Cup came in 1986, even before Lionel Messi was born, when Diego Maradona led his side to world football triumph.

France was the first team since the 2006 finals to make it out of the Group Stages after winning the previous edition of the World Cup. The last World Cup champions to crash out of the next tournament was Germany, eliminated in the group stages in 2018 following their triumph in 2014. France was also marked as an outright favourite to win the World Cup right alongside other teams that have fell to the many shock results in this World Cup, but the Les Bleus have looked like a team set to retain its crown at every turn against their opponents, starting their group stage campaign strongly with a 4-1 win over Australia.

The two sides have faced each other on three separate occasions previously, with Argentina being victorious against the French in 1930 and 1978 in the group stages, while France’s sole victory came in 2018 with their 4-3 win against the South Americans. Argentina have already got their revenge against Croatia who beat them 3-0 in 2018 to book their place in the final two, and will be looking to do the same against France this time with a very huge bonus incentive, a 3rd World Cup to their catalogue. While France and their Mbappe will be looking to rain on Argentina’s parade by adding their 3rd World Cup title to their history. Their 2018 affair was able to marked as the match of the tournament with so much restless drama and so many goals, amongst them Benjamin Parvard’s volleyed goal of the tournament topping Di Maria’s top corner set goal of the tournament contender in the same match.

Julian Alvarez, Enzo Fernandez, Rodrigo de Paul and Emiliano Martinez have been the players who have also stepped up in this tournament and have been a problem for many teams in their brilliant run to the final. Julian has managed to score 4 goals in 4 appearances for his team in this tournament so far, Enzo Fernandez scored the 2nd in the win against Mexico that started Argentina’s resurgence. Antoine Griezmann has made a very good argument for himself to be in the conversation of ‘Player of the Tournament’ with his most chances created statistic backed by the visual eye 10/10 performances. He has also assisted the most goals, level with Lionel Messi, with 3 assists. While Olivier Giroud, who’s since become the country’s top scorer in their history, has also helped his team’s cause with a return of 4 goals in 6 appearances. News broke out this morning that Karim Benzema will be available to play the final for France, which will be even more for Argentina to worry about.

The final is set to be stacked with talented, skilful players who are sure to make it an enjoyable experience for all fans who’ll be watching on.