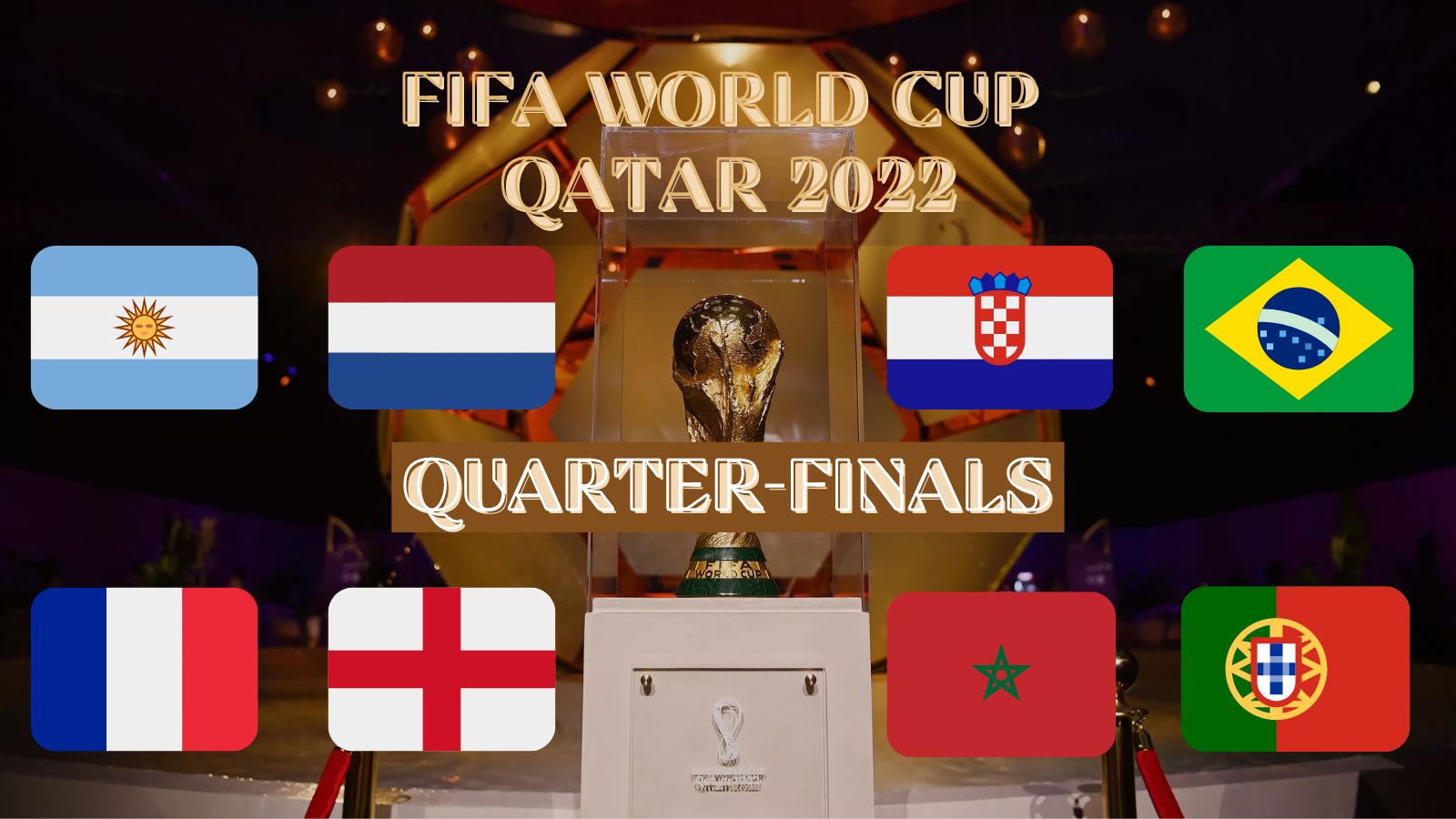 The 2022 FIFA World Cup is starting to set its pace as it nears the penultimate round, and only 8 teams remain in contention to lift the trophy to become champions of World Football. Here are the 8 teams that remain and their respective fixtures:

The first quarter-final of the 2022 FIFA World Cup features 2 teams that don’t really have a history of clashes with each other, and Brazil have been touted the heavy favourites to lift the trophy. Croatia managed to just nick qualification from their group when they avoided defeat against Belgium which knocked out the Red Devils, while Croatia qualification set up an exciting encounter with Japan in the Round of 16. They were able to defeat the Japanese on penalties after a brilliant display by goalkeeper Dominik Livakovic in the penalty shootout, after the 2 sides played out to a 1-1 draw. Brazil on the other hand put in a scintillating display of attacking football, sparked by the return of PSG superstar Neymar, defeating Japan’s fellow Asian side, South Korea 4-1. Goals that came from multiple sources through Vinicius Jr., Neymar (penalty), Richarlison and Lucas Paqueta inspired an excellent win by the dancing Brazilians in a continuing bid to be crowned World champions. The result allowed a showdown to be set up between Croatia and the South Americans in the quarter-finals, a clash between 2018 FWC’s runner-ups and the country with the most World Cup trophy wins in the history of the competition. It will be a tough time for Croatia especially given Neymar’s Man of the Match performance and return, and the Brazilian squad seems to be more united than ever and an attack that seems unstoppable and enjoying its football, but this is a World Cup of surprises and anything can still happen.

The second quarter-final of the tournament is between 2 teams that have lost their respective finals in 2 of the last 3 World Cup editions. Netherlands lost the final to Spain in 2010 while Argentina lost to Germany in 2014, the Dutch team are looking to get back on their high horse as a powerhouse in international football. Many football fans have dubbed the Dutch as their ‘Dark Horses’ meaning they are the team to shock everyone that is not on everyone’s favourite’s list, while Argentina on the other hand have been named alongside France and Brazil as favourites to finally be crowned World Champions for the first time since 1986. Netherlands finished top of Group A and beat USA 3-1 to book their spot in the Last 8 in a tournament where they have been doing all the right things under Louis Van Gaal’s guidance. Argentina slipped in the beginning of the tournament when they lost 2-1 to Saudi Arabia but were able to find their feet when they needed to, managing to finish top of Group C and defeated Australia 2-1 in the Round of 16 to make it to the quarter-finals. Both teams have ticked every box of their placement by football fans so far and it is bound to be a tough clash for either side with Messi in lethal form and Cody Gakpo a dangerous marksman for the Dutch.

A mouth-watering clash between 2 sides who have defied the odds against them that were placed in the beginning of the tournament. Morocco continued their impressive run in this World Cup when they beat Spain on penalties, a shock result that continued Morocco’s unbeaten run in this tournament to 4 games now and became the fourth African team to reach the Last 8 of the FIFA World Cup (following Cameroon, Senegal & Ghana). Morocco finished top of Group F with 7 points after going unbeaten in the group stages (0-0 vs Croatia, 2-0 vs Belgium, 2-1 vs Canada). They now face a Portugal side that finished top of Group H, and beat Switzerland by a devastating score of 6-1 in the Round of 16 to set up a date with the flying African side. Morocco’s watch will be on the ever-present Cristiano Ronaldo but they should not direct their efforts away from Joao Felix and Bruno Fernandes if they want to be part of the top 4 teams in this year’s edition, while Goncalo Ramos also poses a threat to the side after his hattrick against Switzerland in the Last 16. Portugal have to place a wary eye on the right flank of Morocco flooded by Chelsea forward Hakim Ziyech and PSG fullback Achraf Hakimi, who scored the winning penalty to send Morocco into the quarter-finals. Sofiane Boufal is also a huge threat down the left for the African side and Portugal’s defence should be wary of the left winger’s sparking creativity, it sure is set to be an interesting clash.

This is a clash that everyone thought would be the 2018 World Cup final before England’s hopes were dented by Croatia. These are 2 teams that have been in excellent form in this year’s World Cup and both managed to secure early passage to the Last 16 after just 2 matches played, England finished top of Group B and were undefeated in the group stages as well. France finished top of Group D but were victims of a shock defeat to Tunisia, assisted by a massive change to their line-up for the final group D match against the African team. England lined up to face African Champions Senegal in the Round of 16, and goals from Henderson, Kane and Bukayo Saka helped the Three Lions overcome Senegal 3-0 and advance to meet another deadly force in the quarter-finals. France managed to rack up a convincing 3-1 win against Poland in a record-breaking affair for them, Olivier Giroud’s goal to open the account for France in the game, became the Milan striker’s 52nd for Les Bleus to make him top scorer in their history, surpassing Thierry Henry in the number 1 spot. Kylian Mbappe added onto the tally to become the player with the most goals at the World Cup before turning 24 with 8 goals (previous held by Pele with 7 goals), the PSG forward’s brace made him outright top scorer of the tournament sending him to 5 goals. A tight clash is to be expected with both teams boasting world class footballers in their arsenal in all departments on the field, it sure is set to be an interesting match.

The World Cup is fast pacing towards its conclusion and he games left to play are a guaranteed spectacle for the average football fan. “The World Cup that just keeps giving”, a commentator said once during Spain’s defeat at the hands of Japan, and indeed that is the case as we see with these fixtures that have been lined up, keeping up with its theme of shock results and big names exiting early.