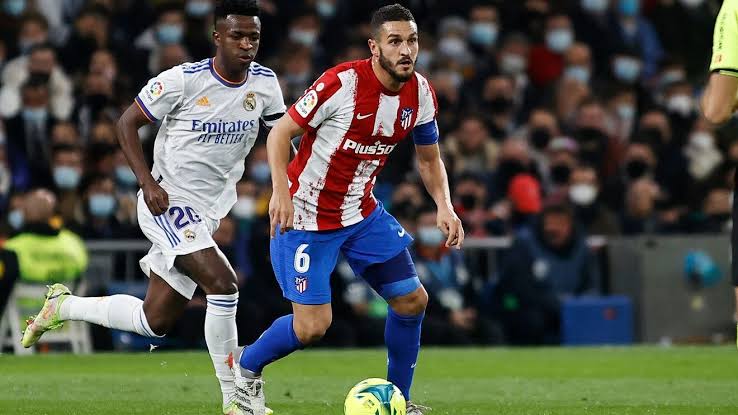 On Sunday Real Madrid travelled across the city to visit their city rivals, Atletico Madrid at the Wanda Metropolitano looking to solidify their La Liga ambitions for this season. While at the Spotify Camp Nou the Catalan club were joyful courtesy of Robert Lewandowski once more, the Polish international on the scoresheet once more.

Atletico were playing like they meant business, keeping the Real Madrid defence the busier of the two sides, attempts from Felipe, Carrasco and Kondogbia not finding the target in just 16 minutes into the game. Real Madrid then punished Atleti, for their goal wasting action in front, through Rodrygo who blasted the ball on first touch past Jan Oblak after receiving a gorgeous over-the-head pass from Aurelian Tchoumeni. It was all Madrid from the goal on out, Vinicius Jr. playing a one-two with Luka Modric and running at the Atletico defence before releasing a shot from close that beat Oblak but struck the upright. However that wasn’t the end of that move as Fede Valverde arrived in the box to finish off from the rebound to make it 2-0 to Real. That was Valverde’s 3rd goal in as many matches. Atletico’s Carrasco was able to test Courtois once again in the 39th minute but the Belgian was equal to the effort and the teams went into the break with a 2-0 Real lead.

There wasn’t much action or any real goal threatening attempts in the 2nd half. However, it was Atletico who were creating more chances but were just not finding the target, and the Spanish and European Champions were happy to sit back and watch Atleti not take their chances. It was in the 82nd minute when the hosts were finally able to pull one back from a corner, through Mario Hermoso’s header home. in the 91st minute, Mario Hermoso snubbed any chances for an Atletico comeback when he was booked for the second time in the game and received his marching orders for a foul on Dani Ceballos. That was the dramatic end to the game and Real Madrid were able to maintain their 100% record with a 2-1 win over their rivals, and are still 1st with 18 points from 6 games. Atletico are now 7th with 10 points from 6 games (3W, 1D, 2L).

In Barcelona, the Catalan club played against Elche on Saturday. The unbeaten Barcelona were looking to bounce back from a midweek defeat to Bayern Munich, and Robert Lewandowski looking to continue his goal scoring form in La Liga. They lived up to those very expectations as Robert Lewandowski extended his La Liga tally, with a brace on Saturday, to 8 goals and helped his team win by 3-0. Memphis Depay adding the 3rd goal for Barcelona. Barcelona are currently 2nd with 16 points and are also unbeaten (5W, 1D, 0L), trailing Real Madrid by 2 points.