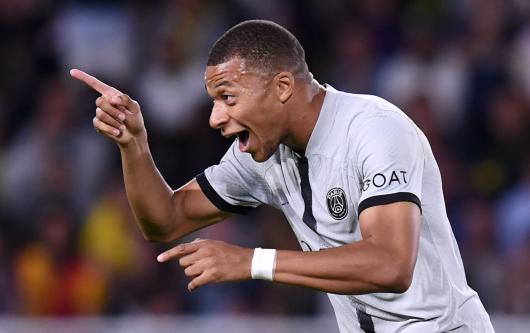 Mbappe scored PSG’s sole goal in their 1-1 draw against Benfica at the Parc de Princes in France, during their UEFA Champions League Group H clash, in a game that Lionel Messi wasn’t fit enough to feature in. A 39th minute penalty allowed the 2018 World Cup winner to become top scorer for PSG in the Champions League with 31 goals for the French club, passing Edinson Cavani’s 30-goal tally. PSG are now top of their group with 8 points, Benfica are 2nd with a points tally of 8 points, only behind because PSG has scored more goals than them.

Rumours have been swirling around the former Monaco player that he is not happy with his situation in the French Capital, and that he would like a move away from the club, this comes after he opted for a contract extension with PSG as opposed to a place at Real Madrid in the recently closed window. Many fans have cited that his unhappiness may be caused by the fact that PSG have not honoured a contract clause that allows Mbappe to play his preferred position, while others have theorised that it may be due to former Barcelona duo, Messi and Neymar’s surge in form this season. Of course, nothing has been confirmed regarding the teenager’s situation at the club and he will definitely be celebrating becoming PSG’s Champions League top scorer an we are yet to hear more from other news outlets.

Manchester City lined up for only the second time this season without the presence of top scorer Erling Haaland up front, Guardiola giving the young Norwegian a break from the recent run of matches he has had. Manchester City thought they had taken the lead in style when Rodri fired a flying rocket shot into the top corner of the net, but a VAR goal check would prompt the referee into ruling the goal out for a handball on Riyaad Mahrez. The Cityzens were then awarded a penalty after another VAR interventioin the 22nd minute, this time for a handaball against Copenhagen. Mahrez stepping up to take the penalty only to have it saved. Things took an even more sour turn for City when Sergio Gomez was sent off in the 30th minute, after VAR showed that he pulled an on-goal Haraldson, thus denying him a goal scoring opportunity. City had to play the rest of the match with 10-men and Erling Haaland didn’t feature at all, in a game that resulted in a 0-0 draw.

Chelsea travelled to Italy to face Milan in their return fixture after dismantling them 3-0 in their previous clash, looking to go top of Group E. Jorginho’s penalty goal, from a Tomori foul on Mount inside the area as well as a tidy Aubameyang finish was enough to secure all 3 points for The Blues and move them to the summit of their group after a shaky start. The win coming with a negative of Reece James’ injury. The European Champions, Real Madrid had to leave it until late to rescue a point against Shaktar Donetsk when they fell to a 46th minute Shaktar goal. It was the previously blooded Antonio Rudiger who would get the very last minute equaliser in the dying embers of the game, in the 96th minute. The defending champions currently top Group F with 10 points.

Juventus’ dismal form continued this season when they suffered a humiliating defeat to Maccabi Haifa, who were able to record their first ever win in the Champions League. The pressure is now mounting on Allegri to turn these results around and the Juve manager has been quoted saying, “it is now a challenge and I like a challenge”, when asked about the pressure piling on whether he keeps his job or not. Jude Bellingham grabbed yet another Man of the Match award in Dortmunds 1-1 draw in their Group H clash against Sevilla, as they retain top spot in the group heading into matchday 5.