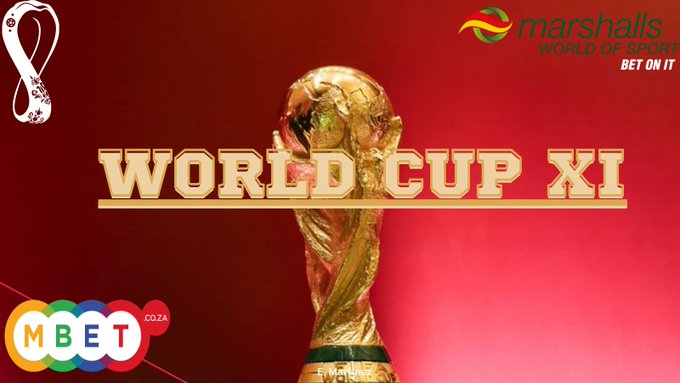 Following the conclusion of the World Cup, many stars took their opportunities to shine on the biggest stage of football with all eyes on them. Some took their chance to shine for their country and others crumbled under the pressure put on by what is most certainly one of the best ever FIFA World Cup tournaments. Here’s our Best XI of the World Cup:

The Aston Villa man was very crucial in Argentina’s World Cup win throughout many stages, looking back to the quarter-finals against Netherlands, and a great performance against the Croatians in the semi-final, and an undeniably world-class performance in the final against France. The Argentine shot stopper made 2 saves against the Netherlands in their penalty shootout affair giving his team the win, and made 1 save in the penalty shootout win in the final against France, after he had made literally a last ditch save against Kolo Muani in extra-time that would’ve killed the game for France. Martinez is a huge hero for his nation.

The PSG full-back was one of the highlight players for his nation heading into this World Cup campaign, one of the standout players in a very excellent run to a record-making 4th placed finish in the World Cup, highest finish by an African team. He was part of the defence that kept a highly impressive 4 clean sheets in 7 games, and started all 7 games for the African side making the most tackles (26) in their impressive run that included victories over Belgium, Spain and even Cristiano Ronaldo’s Portugal before eventually falling at the feet of the French in the semi-final.

The young centre-back was a very vital part of Croatia’s solid defence in their run to reaching 3rd place in the final standings. He even got a goal to add to his impressive solid performances and was a very vital back up to his goalkeeper Dominik Livakovic as they kept a very mauling Brazil side’s jaws shut before eventually winning on penalties against the South Americans. The stats shown above are a true reflection of the 20 year-old’s very impressive World Cup campaign.

Another Morocco player makes it into this eleven after their impressive performances that took them to their fourth place finish, The Moroccan captain showed great leadership in inspiring his team to hold onto to their mentality that granted them many impressive victories on their very appraised journey. Though his World Cup campaign was ended by an injury in the early stages of the semi-final clash against France, he can be proud of what he and his teammates have achieved and the history they’ve made.

The left back’s most memorable moment from this edition of the World Cup is most probably his opener against Croatia in the semi-final, scoring inside 5 minutes to set his team up for the final before Kolo Muani added a late goal to seal the victory for the French. Hernandez also added 2 assists to his statistics in this World Cup campaign, and was impressive throughout the World Cup and a very vital part of his team’s defences and offense as they embarked on a journey that granted them a 2nd placed finish.

The Moroccans’ impressive defence was the pivotal point behind their success in the World Cup, and at the pivot of the midfield was Sofyan Amrabat, he was literally everywhere on the pitch for the Atlas Lions. A very important figure in the midfield for the African side and had the most ball recoveries in a single campaign for any African player with 51 recoveries of ball possessions, playing every single minute of every single match for Morocco, including their 2-1 loss to Croatia in the 3rd/4th place playoff.

The 2022 FIFA World Cup Young Player of the Tournament is a sure-fire addition to our World Cup Best XI because of his many rupturing performances in the heart of Argentina’s midfield. The 21 year old Benfica midfielder made the 3rd-most tackles in the tournament with 22 tackles (behind Hakimi and Kovacic) and also adding a single goal and assist in 563 minutes played. Enzo scored a very needed goal by Argentina against Mexico to lift their heads up following an opening day 2-1 loss against Saudi Arabia, and from then being a very crucial member of the team that eventually became World Champions.

Antoine, like Amrabat, was a figure that was everywhere constantly for the French side’s midfield and was a very strong candidate for the Player of the Tournament award. The Atletico Madrid player was very involved in the French’s very bolstering attack, being the player who created the most chances in the tournament, having the most key passes as well and finishing as the joint top assist maker in the tournament (3). This was an impressive display of technicality by the French midfielder in a very lovely display of tactical football earning him a very deserving spot in the eleven.

The young Argentine striker impressed with 4 goals in 4 starts for the national team including goals in the semi-final and the all-important matchday 3 against Poland that secured their qualification to the knockout stages. The Manchester City forward made his first start against Poland after making some impressive cameos in the first 2 matches and proving for certain that indeed his future and the future of football are in secure hands.

The now 24 year old superstar was undoubtedly one of the very best performers in Qatar and the very best of his winding highlight reel is scoring a hattrick in the final, becoming 1 of only 2 men to ever achieve this incredible feat. Mbappe finished as the tournament’s top scorer with 8 goals, a total of 12 goals for him across 2 World Cup campaigns he played, inspiring his team’s comeback in the final with a quickfire brace inside a minute. Mbappe also had the most successful dribbles completed in the tournament with 25 successful dribbles and was an unstoppable force before France’s loss in the final against Argentina.

In Lionel Messi’s last ever World Cup campaign, the Argentine captain was able to pick up the Player of the Tournament award, and match and break a handful of records in the process. Him picking up the Player of the Tournament was a sure guarantee that he was to be included in the list, The Argentine maestro finished with the joint-most assists (3) while also having scored the 2nd most goals in the competition (7). Only Antoine Griezmann created more goalscoring chances than the PSG forward and only Mbappe and Jamal Musiala completed more dribbles than him. Messi became the first player ever to score in each stage of the FIFA World Cup and became the first player ever to win the World Cup Golden Ball twice.

Let us know on our Twitter (BET_ON_IT) if your Best XI is different from ours, and always BET ON IT!!