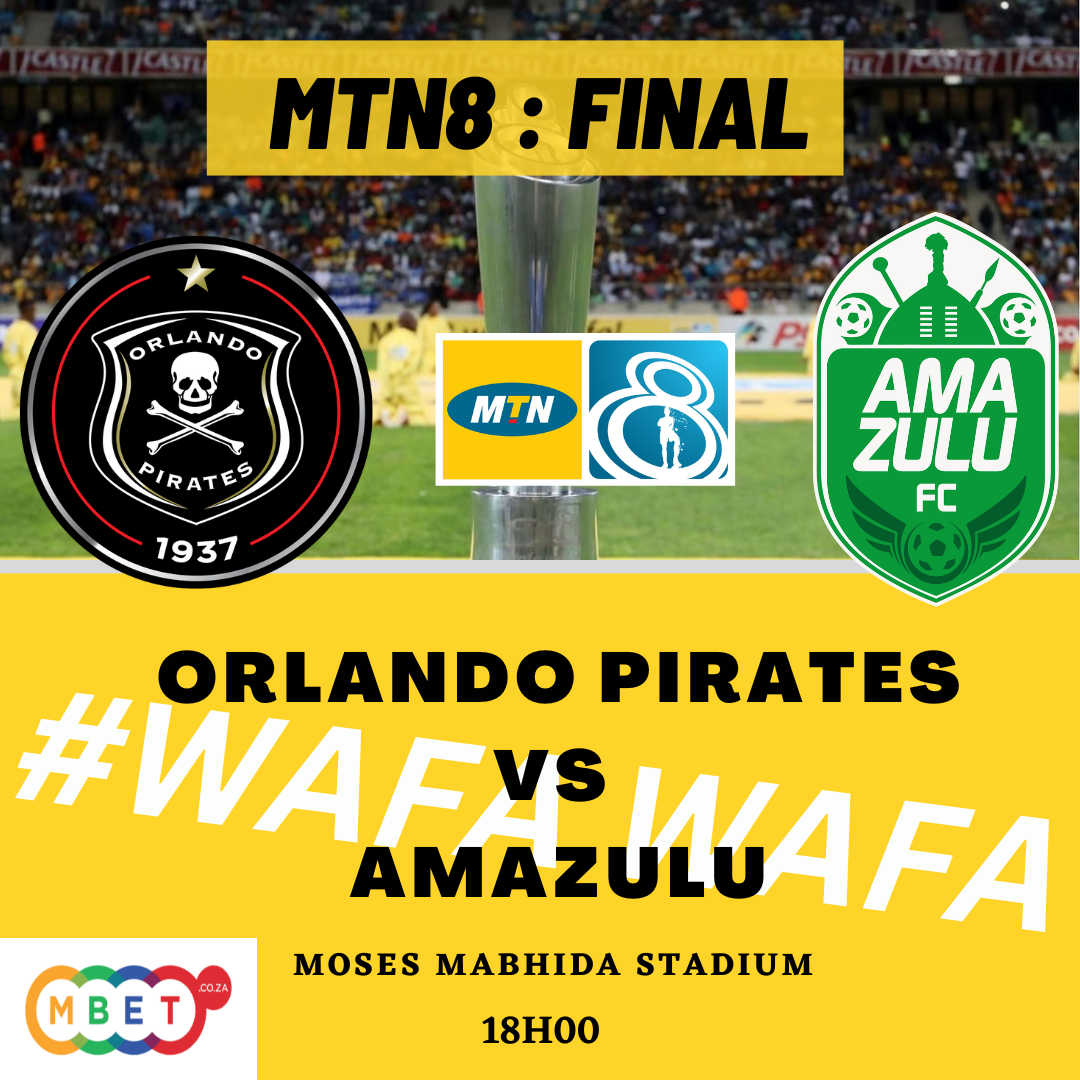 Orlando Pirates come face to face with AmaZulu with a chance to win their first piece of silverware since 2020 and AmaZulu make their first appearance in a cup final in 12 years. The two teams meet at the Moses Mabhida Stadium in Durban on 5th November 2022 for a chance to be crowned kings of the MTN8 2022 and a tough clash is to be expected from the 2 sides. It all goes down on Saturday, #WafaWafa.

AmaZulu were able to defeat Kaizer Chiefs in their semi-final clash that ended 1-1 on aggregate and the Durban-based club going through to the final on the away goal rule. It was a magnificent display by Usuthu managing to keep Kaizer Chiefs at bay especially in the second half of the 2nd leg after the Soweto giants were coming on stronger with their advances, but failing to breach the impenetrable AmaZulu defence. New head coach Brendan Folz has failed to win any of his 9 matches he’s been head coach across 2 clubs (Marumo Gallants & AmaZulu), and a cup final against Orlando Pirates is most probably the sternest test of his very brief tenure under Usuthu.

Orlando Pirates thrashed Mamelodi Sundowns 3-0 in the 2nd leg of their semi-final battle, after a 0-0 stalemate in the 1st leg, Pirates advancing to the final of the MTN8. Monnapule Saleng has certainly captured the Orlando Pirates headlines in the last few games, netting a brace against Sundowns, before a loss against Chiefs in the Soweto derby kept him quiet. The 24-year old will surely be looking to bounce back from an worrying performance to help his team lift the MTN8 for the 7th time since its inception.

George Maluleka is on the verge of making history in the competition as he is going to be making the most MTN8 Final appearances when he lines for AmaZulu against Orlando Pirates, making his 6th appearance. Maluleka was very vital for AmaZulu in their semi-final victory against Kaizer Chiefs, his former club, putting on a MOTM performance. Orlando Pirates’ midfield will have to be on par to nullify the threat of Maluleka running around the midfield centre, while also Pirates have a threat of their own in Ndlondlo in the midfield.

AmaZulu will be having a large crowd backing them when they take on the Buccaneers, more than usual, as some Kaizer Chiefs fans will be in the corner of AmaZulu, hoping the KZN club can upset their Soweto rivals and derail their champagne trophy celebrations.

A tough clash is to be expected and Pirates are expected to be the more dominant side in the contest, but the game will be an interesting tactical clash. It remains to be seen who emerges victorious and is able to claim the title of MTN8 Champions by the end of Saturday. I think Orlando Pirates can have another one over their rivals Kaizer Chiefs by winning the cup before Chiefs can get their first since 2015.